The realisation that my son Lucien saw the world in a different light came slowly, but there were small clues along the way.

Once, when asked to describe the colour of a banana, he answered white, not yellow. (When you think about it, he could well be right: while the skin is yellow, the flesh is much paler than that.)

And then there was the endearing way he followed the squares on a rug when he was learning to walk.

Watching him trace the pattern with serious concentration, I once flippantly remarked to my husband: "He's a little bit like Rain Man, don't you think?"

Even 25 years after the release of that Oscar-winning film, Dustin Hoffman's character of Raymond Babbitt — who had prodigious gifts with numbers and memory — was probably the extent of my knowledge about autism.

But since Lucien was diagnosed with autism four years ago — and his younger brother Felix not long after — the learning curve for our family has been steep.

I now know that a narrow notion of what autism looks and sounds like is terribly outmoded.

Go back in time, and you quickly realise that our knowledge about autism has undergone an incredible transformation since it first appeared in the medical literature in the 1930s and '40s.

As I trawled through the ABC archives to find the first mention of the word, I was immediately struck by how recent public awareness of autism actually is.

Back in 1968, a group of other Melbourne mothers became the first to talk publicly about autism on our television screens.

They were interviewed by the late journalist Peter Luck for This Day Tonight, then only in its second year.

Dressed in twin sets and pearls with their children playing at their feet or on swings in the backyard, the women were the epitome of suburban respectability.

But what's clear from the footage is that 1960s Australia was an unforgiving place for the women and their children.

Very few people had even heard of the word autism, and far fewer knew what it was.

Perle Tre Week's son Brian, who was diagnosed with autism when he was nine, was not at school and nor were the other children featured in the segment.

As the women explained, there was simply no place for them to go.

Asked by Luck what was most needed for autistic children in Australia, the mothers were unanimous.

"A centre where they can be taught before they give up trying," Perle says.

"My little boy's just given up trying. Before he was interested in letters and writing and now he's not interested in anything because he doesn't go anywhere. He's home all day, every day."

Historian Dave Earl says the 1960s was a time of change in the disability sector.

Post-war ideals of wholesome families dominated the popular consciousness, and there remained an enormous amount of stigma and shame if you had a child with a disability, particularly an intellectual or psychiatric one.

But families were starting to fight back, and the decade also saw parents form their own associations to agitate for change.

"There was a huge amount of shame.

"I think this was one of the reasons why, in so many cases in so many communities, these families with disabled children banded together.

"They found other people that were like them, that had the same difficulties as them, that could offer them support and friendship."

In 1964, Dymphna Eszenyi became president of the first autism association in Australia, the Autistic Children's Association of South Australia.

She died in 2000 but her daughter, also called Dymphna but known as Deej, still has the medical notes from the psychiatry clinic at the Adelaide Children's Hospital for her younger brother.

Born in 1957, he was initially diagnosed with childhood schizophrenia. By the time he was five, the diagnosis had changed to infantile autism.

The following year, he started at what was then called an "occupation centre" for children.

"You wouldn't call them schools because there was no sense that the children were being taught anything, they were being occupied," Deej says.

When the centre threatened to exclude him for "disturbed behaviour", Deej says, hospital notes showed their mother "begging for him not to be excluded".

"I wonder, looking back on it, what was the alternative for children back in those days?" she says.

"What would happen when your child was excluded for their autistic behaviours?"

When there were no other options available, parents often took matters into their own hands and created their own schools or day centres.

In Mansfield in north-east Victoria local GP Joan Curtis founded her own autistic school and travelling teacher service for her son Jonathan and other autistic children.

"Even though [my husband] Humphrey and I were both doctors we knew absolutely nothing about autism, we'd barely heard the word," Dr Curtis recalls.

"I don't remember the explanation but what I do remember was the advice I was given which was take him home, love him, and when you can't manage him any longer we will put him into Kew Cottages."

Kew Cottages was a residential institution in Melbourne.

Advice to institutionalise children with autism was common in the 1960s, as was the belief that mothers had somehow caused their children's autism by being clinical or cold in their parenting approach.

Beyond the 'refrigerator mother' theory

The "refrigerator mother" theory was particularly potent in America, where it was promoted by Bruno Bettelheim, whose psychology credentials were later discredited.

Dr Curtis herself was once told by a close friend that she had used up all her love on her first-born son; there had simply been none left for Jonathan and autism was the result.

Listen to the program 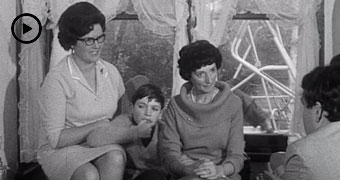 The History Listen traces changing attitudes towards autism in Australia.

I also unearthed an interview with Jean Wareham, who had appeared on an ABC radio program called Prospect in 1973.

Her then 17-year-old son David had been diagnosed with autism and she gave a moving account of the kinds of attitudes her son faced at the time.

During one outing her son was confronted by a woman as he walked down a flight of stairs.

"She was walking up and she, as a middle aged to elderly woman, thought considering he was a young person he should have given way," Ms Wareham said.

"And she stopped and quite actively abused him because he wouldn't get out of her way.

Ms Wareham died in 1996 but David's oldest brother Neil says his mother, who was university trained in social work, had a lifelong mistrust of psychologists and psychiatrists because of the mother-blaming that occurred at the time.

He says his brother's autism, and the impact it had on his family, at a time when there was little support available, has had a lasting effect on his non-autistic siblings.

"Everyone was learning, we were all learning, my parents were learning. I can look at it now and see how incredibly hard it was on all of us," Mr Wareham says.

"The journey has been extraordinarily difficult. Even if we had been starting 10 years later I think it would have been a lot better."

New and compelling histories from Australia and around the world.

Now, of course, we see autism as a spectrum, and our definitions and understanding have expanded — although in many ways we still have a way to go.

So what has become of the boys who were featured in the ABC archives?

Jonathan Esser still lives in Mansfield, down the road from his mother, with three other autistic men in a shared house with live in support.

And Deej Eszenyi's brother lives independently, with some help.

"I am certain that my mother, until her death, lived in fear about what would happen to him — how would he get on," she says.

"He's well known in his community. Most people don't take advantage of him, most people treat him with extraordinary kindness and understanding.

"And that I think that is a message that might be given to the parents of many young autistic people today."

And for families like mine, it is certainly something we all hope for — that society will continue to gain a better understanding of autism and fully embrace our children for who they are.