Karan Nagrani says in some ways "coming out" as having a disability was harder than coming out as gay. This is his story of life with retinitis pigmentosa.

I work in the visual world of marketing, but if you try and shake my hand I probably won't see it.

A lot of people spend their lives believing there's a light at the end of the tunnel. However, for me that tunnel is my life.

I live with a disability that has left me with only three degrees of peripheral vision, night blindness and partial deafness.

What is retinitis pigmentosa? 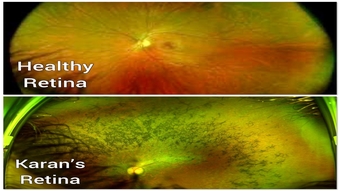 More information on retinitis pigmentosa can be found on the Vision Australia website.

I was born with a genetic eye disease called retinitis pigmentosa (RP). It's a genetic eye condition that causes cells in the light-sensitive retina to degenerate slowly and progressively, eventually leading to total blindness.

I grew up in a culture where any imperfection had to be hidden. I wasn't allowed to tell anyone that I had this disease.

Even though I struggled as my eyesight deteriorated, I was strongly discouraged from telling any of my friends or extended family.

But there was another secret I was hiding growing up: my sexuality.

The pressure of living in silence about the fact that I'm going blind and I'm gay made me realise that in order to live my life and be true to myself, I had to move to a country where being different was not a crime or something to be ashamed of.

I moved to Australia in 2006 and found not just my voice, but who I am as a person and for that I can't thank Australia enough.

I can do anything, if given a chance

Even though I moved to a much more liberal society, I still felt shy opening up myself.

At a night out or at parties, I'd pretend to be drunk and clumsy rather than admit I literally didn't see that table there that I just walked into.

The gay scene can be a little shallow. I started to realise that my gay "friends" stopped inviting me to go to the pub, because standing next to a guy with a cane (regardless of whether I was decent looking or ugly) was "unattractive" and might stop them from being able to pick up.

So I just stopped going out to bars and clubs.

It was almost like I have to come out of two closets — a gay one and a disabled one. Coming out of the first closet has always been easier, especially when it comes to work.

I have a degree in marketing and I don't mean to sound arrogant, but I am really good at what I do.

I take so much pride in my work, that in my current workplace they call me names like "the machine" and "Duracell", because of how fast and effective my marketing work is.

But it's not always easy deciding whether to disclose my eyesight issues or not during a job interview.

I tend to get one of two reactions. The first being the overdramatic sad faces and pity. The other where they have clearly switched off and start acting like this is a waste of time and that I would be a liability.

Employers' lack of vision getting in the way

I have had to quit jobs because I was warned by HR for lying by hiding my disability.

When I turn it back onto them and ask "Well would you have hired me if I told you?" As much as they give you the politically correct answer, you know it would have been unlikely.

This is why there are gaps on my resume, because sometimes it's taken six months to get a job.

As my eyesight got worse, I had to take my cane with me everyday and missing people's hand while they're trying to shake mine was not only embarrassing and stressful for me, but it made me look rude and unprofessional.

One of the worst experiences I had was when I worked for a law firm. The managing director told me at the interview that I am "a risk" and that he's "doing me a massive favour" even considering me for that role.

I felt like walking out of that interview, but I needed a source of income, so I agreed to work there.

Despite knowing I am legally blind and the fact that I need to use my cane when I'm out and about, he expected me to go cold calling to potential clients and I had to use a taxi at my own cost.

After three weeks, I couldn't take it anymore and refused to go back.

I've had several companies take advantage of my dedication and passion. In order to prove that my disability won't stop me from creating fantastic work, I worked very hard and no matter how hard I worked, more and more was expected.

I would go home with red burning eyes from straining at a computer screen all day, but continued to be strong and carry on.

It's not all been bad, though. When I worked for the Cancer Council WA, my manager, Betty Cottrell, was the most supportive person I could have asked for in a workplace.

I also have to admit that I lied about not having a disability at the interview. But when I told her, the response made me emotional because I felt like she really wanted to do anything she could to support me so I can excel at my job.

Looking to the future

I am 34 and at my latest check up with my ophthalmologist, it showed my peripheral vision has decreased and I have cataracts. The ophthalmologist says the cataracts are most likely caused by me straining my eyes when working with video.

Of course, I'm terrified about what I'll do for work after I go blind. I love what I do so much it will be extremely hard to deal with.

But, I still feel like the luckiest guy in the world because of the unconditional love and support I receive from my husband, David, and my family.

People often say to me, "Oh life must be so hard for you. You're only 34 and are practically blind."

I have a husband that loves me more than anything, I have a close-knit circle of friends who are there for me when I need them, and a family that makes me feel like I have nothing to worry about.

I now avoid going out to nightclubs and pubs with low-lighting and shallow people.

I prefer to hang with my husband at home or with real friends who respect and love me for who I am. And where we don't need to have dim lighting to create an ambience.

My life is not less than yours, just because my vision is going.

So that's me, the blind marketer. Try me, I'll surprise you!

Karan is a 34-year-old man, living in Perth with his husband, David, and his French bulldog, Henry. Karan currently works as a marketing manager, continuing to prove himself through his work as an asset. Karan is an animal lover and would love to live in a house where he can have a pet pig.