For 17-year-old Grace Purtle, the local saleyards have been a regular fixture of life.

They're where the teenager, from Manilla in northern New South Wales, has seen the good times, the bad times and everything in between.

There have been good years, like 2021, where the pastures are green, sheep and cattle are making record prices, and everyone's smiling beneath their broad-brimmed hats.

But she has also seen the desperate toll drought has taken on her family, community and friends — the despair etched on their faces as they walked through the saleyard gates.

It was watching those smiles fade away during the drought that made Ms Purtle realise she wanted to be an advocate for mental health, not just at the saleyards but also among her peers. 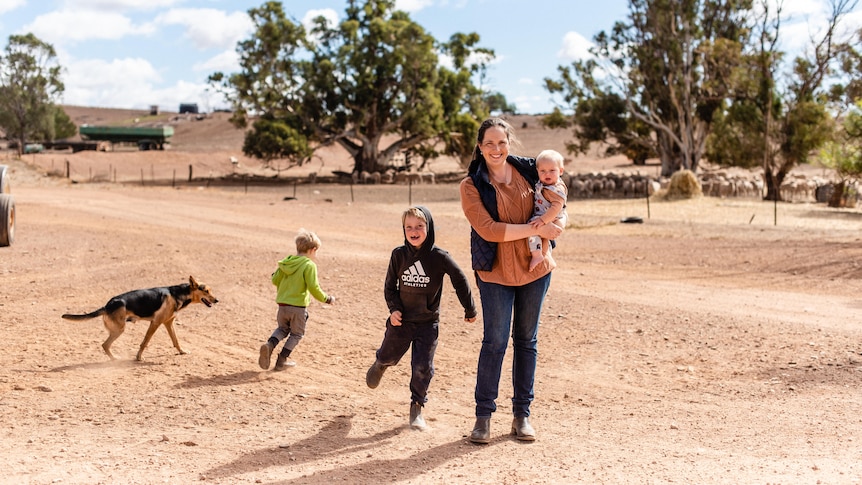 Stephanie Schmidt is teaching farmers some of the tools and questions to ask about life, isolation and the tough times.

Ms Purtle has been working with the Tamworth Livestock Selling Agents Association (TLSSA) and the Rural Adversity Mental Health Program (RAMHP) on their local initiative to get more conversations flowing among farmers.

"It's such a major part of your life and you don't realise until you've been affected by it, or you've had someone close to you affected by it, how much of a toll it takes," she said.

"If I can be involved in promoting the better health of other people and …  people know I'm open for a conversation to help them out, I feel like it helps to break the stigma for a lot of young people that it's not weak to speak."

Farmer opens up about struggle

The mental health campaign from the TLSAA and RAMHP has been running for a few months, using social media to further the reach of videos featuring the stories of local farmers and agents who have struggled with their mental health.

Walcha farmer and livestock agent Gary Olrich is among those who have shared their stories in the hope of helping others.

"I think it was about 1998 or so when I had my first battle with depression," he said.

Mr Olrich recovered from his first bout of depression, but nearly two decades later, around 2018, drought began to take a toll on his life.

"From a financial point of view it was really, really difficult for us to battle through that, so the same thing happened again," Mr Olrich said.

"I was in a critical stage at that stage … I got on some medication, I got some counselling and it took a long time.

"Twelve or 18 months on medication and a lot of reprogramming my brain … and then it rained at the start of 2020 which helped solve a lot of our financial problems."

Tools to talk and cope

As well as sharing the videos of personal stories to the association's Facebook page, the campaign also provides information around suicide prevention, stress management and accessing local services.

"The odds are pretty high that our agents are going to come into touch with a lot of people that have mental health problems."

Because of those odds, Ms Mawhinney wanted local agents to be equipped to deal with potentially challenging conversations, and know where to direct people who were struggling.

She said it was also important agents themselves knew where to get help and that they could talk to someone too.

"We also had a few situations last year where there were a few incidents of people suffering from depression and other issues with clients that were very close to home in terms of mental health, so that was what really spurred us on to raise awareness," she said.

As well as a trading centre, saleyards can be a place for farmers to catch up with friends and socialise.

Tamworth's Kate Arndell, from the Rural Adversity Mental Health Program, has been working with the agents association.

Ms Arndell said saleyards could be exactly the right place to start the conversation about mental health, especially with rural men.

"We need to access that target market at a place where they are comfortable and they already are," Ms Arndell said.

"Certainly those saleyards are a place where people can come together and have that social connection.

"There might not be any specific talk about mental health issues, but it is that connection and sometimes that might be the only time that that group of people get off the property."