When many people are hitting snooze on their alarms, Emily Slotosch jumps out of bed to prepare for her shift at the local cafe.

The 27-year-old never thought she would work two hospitality jobs.

Ms Slotosch has a disability, which she describes as ability.

Kris Hargrave owns and manages the Yeppoon cafe where Ms Slotosch works one day a week.

"Emily is an absolute whiz in the kitchen, so we know that's where she's comfortable — we want to build those skills and build that confidence," Ms Hargrave said.

"We want her to feel like she's extremely confident just to come and do whatever she wants to do in the cafe."

Ms Hargrave started selling coffee from a tin shed-type storefront in 2016 to create stable and flexible employment for herself and her son, Robert.

"Some days it actually makes me cry," she said.

"As a parent who cares for someone with special needs there are constant barriers every single day, but when people come here, there are no barriers, those barriers are lifted.

"Everyone is just treated as equal and it warms my heart." 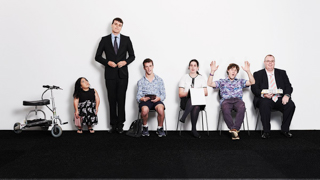 Employable Me follows people with neuro diverse conditions such as autism and Tourette Syndrome as they search for meaningful employment.

When the demand for coffee, food and a place to sit grew overwhelming, Ms Hargrave renovated a house and relaunched the business as a full-scale cafe.

"There were many days where I had to bring Robert to work or I had to leave work early, shut the cafe and go home and be with Robert," she said.

"When you're in another job with another employer, you can't expect them to be that flexible and that understanding.

"I thought to myself, this is the easiest way that I can work and Robert also can be happy spending time with us, and it's taught him skills as well."

Ms Hargrave did not always intend to employ more staff.

"Everyone just welcomed my son, everyone took him under their wing and he was part of the cafe," she said.

"I thought, well, if everyone is going to be like that with Robert, why wouldn't they be able to do that with everybody?"

'The best job in the world'

About six months after opening, the cafe teamed up with Zoe – Life My Way, a small disability support service, to offer training and employment.

Sara Rowley started at the cafe more than a year ago before becoming a support worker.

"They just want to be treated as normal people," she said.

The 27-year-old takes pride in helping her clients work and live in the community.

"You find out all their different personalities, and they just blow your mind with the things that they can do that people think they can't because they're special needs."

Ms Rowley has watched her clients transform and become confident in themselves during their time at the cafe.

"Being able to get a job where they have a sense of responsibility is just something that opens their eyes to the world and opens the world to people with special needs," she said.

"People think, 'They're working here, they've done this, they took my order, they've made my food, they actually are working in the community', rather than, 'Oh no, they can't do that'.

"It's making people realise that they can do anything they set their minds to and that's the most important thing.

"I feel proud of myself doing this job. It's the best job in the world pretty much."

While there had been challenges, Ms Hargrave said the community response had been mostly positive.

"Not a lot of people can understand and accept and be comfortable with people with special needs, and that's OK — everyone is different," she said.

"I've found the customers just slowly adapted and they were very welcoming, so I think we all grew together."

Ms Hargrave has recently started a support group for parents and carers to connect with each other.

"If you want somewhere to bring your special ones or just to come on your own and have a coffee, just let me know.

"It's just home and I want people to come here and feel comfortable.

"I want to build the heart from in the cafe, make that grow, so therefore it's bursting to the point where everyone inside is growing personally and professionally."