Imagine coming face-to-face with a freshly captured, two-metre-tall spitting camel and attempting to put a rope around its neck.

Western Australian man Dr Max Bergmann does this for a living, even though he is legally blind.

Retinitis pigmentosa robbed Max of all but 2-3 per cent of his peripheral vision, but not his passion for farming and agriculture.

After hearing about the plight of Australia's wild camel population, he began researching the benefits of camels and their milk.

Three years on, Max, his wife Ronja, his children — Maya, 3, and Tim, 20 months — and guide dog Forest, milk 40 camels on their 280-hectare property in the Perth Hills for their camel milk skin care brand.

Max uses a unique, trust-based training method taught by Tara Lea and Russell Osborne from Camel Connection at Lakes Entrance in Victoria, which enables him to take a camel from the wild, and within two days have a lead on it. By four months, he's milking it.

"I don't think too much about these things [blindness] I just wanted to do it," Max says.

"I soon learnt I could handle them better than a sighted person because I moved differently. I am not afraid of them. If you don't fear them, they react differently."

Now his camels are so tame, they wander around the garden while his young children play. Visitors are amazed when they can walk right up to an unrestrained camel and pat it. Quite a different experience from the spitting, cranky reputation most associate with a camel.

"They are intelligent and affectionate. They are my best friends," Max says.

Unlike cows, camels need to be completely relaxed, and with their young, in order to let down milk.

"They have to accept me as a second calf, and I can do this in four months, using the trust-based method," Max says.

He believes that with Forest by his side, the camels almost forget him. He says to see such a huge animal bending down to come nose-to-nose with his dog is incredible.

"I can tell you from a distance which camel it is when I hear them. I could be blindfolded and still know which camel I am working with," he says.

The benefits of camel milk

Max is working with Murdoch University on two projects. One is looking at the relationship between the milk let down and the calf in order to help farmers understand how to manage this relationship while commercially milking.

The other project is investigating the potential benefits of camel milk.

"There is a lot of myth and storytelling around camel milk," Max says, but with a PHD in agriculture he is using his scientific background to help researchers.

Are camels the new pet? 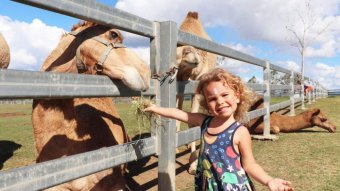 How having a camel as a pet could help solve one of Australia's biggest feral pest problems.

"While milking, I realised my hands were getting softer despite all the hard labour I was doing on the farm."

The milk has a unique molecular structure, high in fatty acid including oleic acid, allowing it to be absorbed into deeper layers of the skin.

Immunologist Andrew Currie, from Murdoch University, is working alongside Max to validate the benefits of camel milk.

"It may have application for use in other areas such as pre-term infant medicine for improving skin, due to its antibacterial and anti-inflammatory properties," Dr Currie says.

"Camel milk is quite distinct. They are quite unique, immunologically, among mammals.

"We are going to discuss with Danish researchers the use of camel's milk as an alternative to cow's milk and colostrum as a human milk fortifier.

"It may replicate the immunological and antibacterial properties of breast milk and potentially avoid the issues of cow milk allergy."

'Not for human consumption'

But Amanda Lee, Professor of Public Health Policy at the University of Queensland and chair of the National Health and Medical Research Council Dietary Guidelines working committee, says there is no quality evidence supporting the claims of the health benefits of camel milk.

"There are many claims in this area but no quality research to support it," Professor Lee says.

"There is risk of it being sold in unpasteurised form as bath milk. [It] should not be used for human consumption."

She warns that camel milk is not suitable as a milk feed for infants and the high cost of it is not justified in terms of health benefits when compared with cow's milk.

Max, however is determined to prove his product is a viable option. He's currently working with other camel experts, liaising with the United Arab Emirates to establish an Australian industry body in order to attract funding and further research.

He believes the camel is one of Australia's best kept secrets, with the healthiest wild population in the world.

"The camel is one of the oldest domesticated animals but there is little knowledge of them as a farm animal," Max says.

"It is stupid to waste them as a resource when they are sought after internationally. China needs baby formula and a lot [of children] are lactose intolerant."

He says all farm animals are feral and that we could just as easily shoot cattle and use the camel.

"It's just a choice," he says. "Camels do far less damage.

"At present, we have decided that the camel should be removed. I think they should both have their place."