Wheelchair Rugby player Chris Bond has led teams to victory around the world, but the upcoming Gold Coast National Championships will be a special campaign for the new dad.

"We've got a one-year-old daughter," he said.

"Victoria's at an age now where she can take a bit more of it in, so she will be there, watching us compete, which will be nice."

The game, formerly known as murderball, attracts large crowds who fill out stadiums to see players collide and chairs flip during contests.

"I'm pretty excited. I'll have to try to remember what it's like to play on court — it's been a long time between drinks for our supporters too," Bond said.

"It's been a while since it was held in Queensland, so we might have a bit of a home ground advantage." 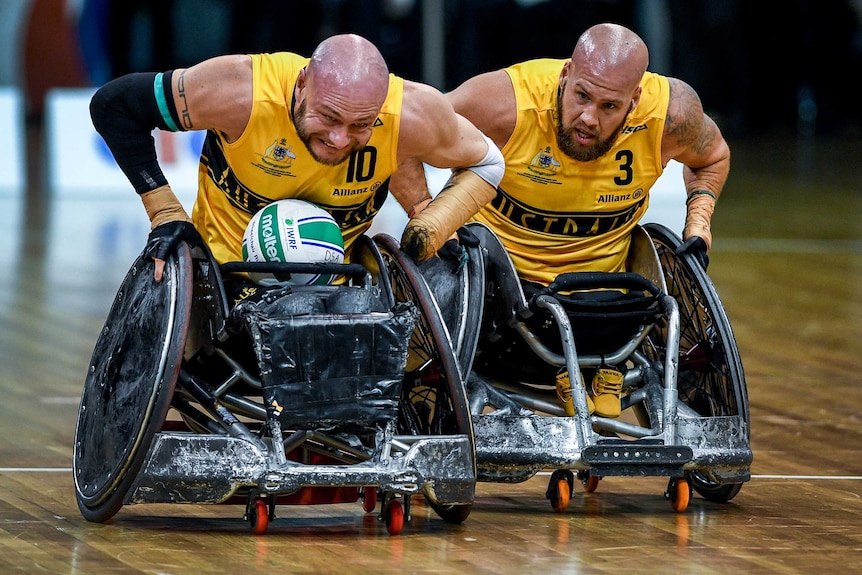 Chris Bond (left) and captain Ryley Batt are the enforcers on the Australian team.(AAP: Brendan Esposito)

"Widely noted as the world's best player is Riley Batt — he's played for NSW, and we are both used to doing it together in the Aussie team, so it's a chance to go head-to-head."

Wheelchair Rugby classifies athletes according to upper body function, from 0.5 to 3.5. A four-person team is allowed 8 points on the court at one time to ensure an even mix of skill and ability.

Chris Bond is a 3.5 player, which carries an added level of responsibility as a ball carrier, point scorer and captain.

"Every classification is vital. Mine is a high-functioning player, so I might have two to three defenders on me at all times," Bond said.

Basketball courts and gyms shut their doors last year due to COVID-19 restrictions, forcing players to adapt to home-resistance training.

But despite the adjustment, players were regaining their match fitness just in time for Tokyo, Bond said.

"There's a light at the end of a tunnel now. It's going to be our highest level of competition before we go to the Paralympic Games," he said.

Bond said skill and stamina would not be the only deciding factors at this year's Games, with the pandemic hindering preparation efforts globally.

"It's just a totally different Paralympics this one — all different countries and COVID-19 climates," he said.

Without the year or so of international competition leading up, I don't know how people are going to perform, but we are going do our best to win that gold medal this year."

"These guys and girls are absolutely brutal. You see lots of spills and thrills through the game. They do not hold back," she said.

"They play just as rough a rugby game as you would see on any rugby field anywhere else."

The Gold Coast National Wheelchair Rugby championships this April at Carrara marks a return to Queensland after being played in New South Wales and Victoria for the past 10 years.

"It's an absolutely stellar location, and from a national perspective, one of the best locations in Australia," Ms Mather said.

To watch these guys and girls compete will blow your mind in terms of what they do and what they can achieve, and just the brutality of the sport.