Casey Hyde is legally blind and by her own admission has a "fear of walking out the front door".

But for this extraordinary woman competing in Ironman events is her "chance to break that fear".

"You get that euphoria after a race of completing something that most blind people can't do," the 35-year-old said.

But the week before her latest race on Queensland's Sunshine Coast, Casey nearly gave up on the event she'd trained three months for.

Her guide was struck down with COVID sparking a nationwide search for an athlete willing to be by her side for the 1.8 kilometre swim, 90km bike ride and 21km run.

Then she was hit by a car while walking across a pedestrian crossing on a Melbourne street with her guide dog.

Shaken but undeterred, she called on Kelly Honess, who'd been alongside her in a previous Ironman event, to be her guide.

"She just said 'Yes' then said 'What are we doing?' She's always been like that," Casey said.

Kelly came out of retirement to join Casey, and had not ridden a bike in four years.

She agreed to accompany her on the swim and bike legs, but could not do the run, so the search for a second guide began.

Casey put the call out to the triathlon community nation-wide and found Zoe Ferguson who, with no guiding experience and on the back of a bout of Ross River fever, agreed to run.

Strength sports changing for people with a disability

These athletes with a disability are finding their place among the gym weights, and they want others to see the benefits. 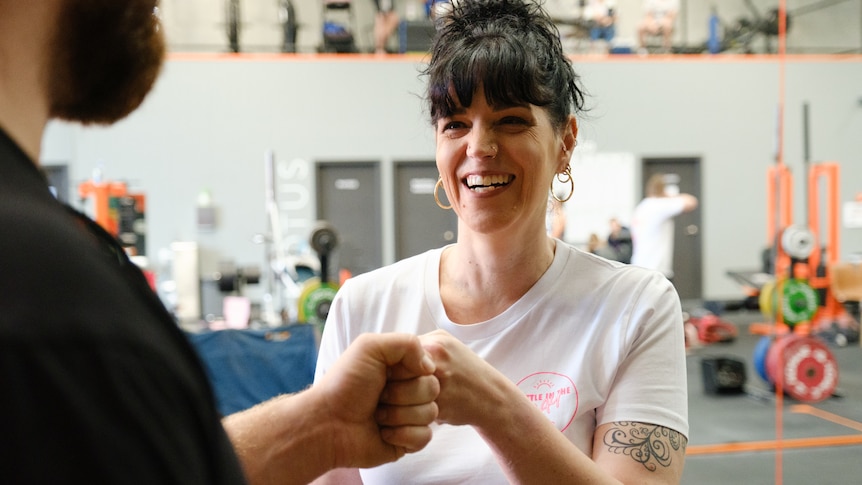 But according to the race rules, the same guide must accompany an athlete on all three sections of the event.

Casey had Zoe on stand-by, requested an exemption with officials and while awaiting an answer, she flew to Queensland anyway — navigating the airports and flight without the assistance of her COVID-stricken guide, or her assistance dog who was recently retired from flying due to her age.

The day before the race, she was given the go-ahead to have two guides accompany her on the gruelling event.

The challenges of race day

With "three metres of not very functional vision" that varies daily, and two guides she had not trained with, conditions going into the race were not ideal.

But with one full and four half Ironman events under her belt, Casey was determined to get across the finish line.

Swimming was part of her childhood at Rottnest Island but hitting the ocean among competitive athletes, while tethered to her guide's ankle, was fraught with danger.

Kelly said her goal was to keep Casey safe.

"If we get tangled up with someone else ... or someone else swimming over her, that can drag Casey down and start a panic attack," she said.

On the cycling leg, the hills and heat were "confronting" and vastly different to the controlled gym environment she'd been training in.

There is also the initial challenge of getting on the tandem bike.

"You've got to be mounting up at the same time ... there's so much balancing and wobbling and once you get going it's like driving a freight train," Kelly said.

"If you're passing someone you've got to remember that you're a stretch limo and you've got an extra couple of metres before you can pull back in."

Casey said the half-marathon run was the most challenging leg.

"My vision is actually worse [on the run], it goes white ... so I use my feet to actually feel where the guide is telling me where to go, so it's a lot of trust," she said.

"Everyone's a beautiful blob ... trucks, buses, noises, and the cyclists that make noise — it scares the bejesus out of me."

Casey said embarking on the run with a guide she didn't know was akin to a blind date.

"Zoe actually thought it was more about tour guiding, she was saying 'To the left there's a gelato bar and to the right there's an Indian restaurant'," she said.

"I was like, 'Oh that's great to know but not during the race. I need to know my race, obstructions, poles, traffic lights, athletes running near me, even cyclists or dogs'.

"And when she started picking up those things she said, 'Wow I didn't realise how limited you are with vision loss'."

Full of adrenaline and nearing the finish line, Casey did not realise she'd broken her little toe during the run — a memory that's now a "keepsake" of a very challenging achievement.

She completed the event in 7 hours and 45 minutes with both guides by her side. But the time is irrelevant.

"I just want to participate and enjoy being outdoors and hopefully safe with someone and just enjoying the atmosphere and meeting new people," she said.

Casey started losing her vision at 22.

"I couldn't recognise people, stairs, understand the community, I kept hitting myself, falling over and injuring myself through being clumsy," she said.

The vision loss is due to genetics but the condition is unknown.

She has peripheral vision but no central vision and low-light and night blindness are particularly challenging.

Turning to exercise helped her cope with the changes in her body.

The former massage therapist has returned to university, plans to move into disability advocacy and be a role model for other people who are blind and vision impaired.

She's found that is becoming increasingly challenging, however, because with age comes fear.

"I'm scared of everything," she said.

"When you get a disability — and it's acquired — you just have to suck it up and give life a go.

"I just want to see the world before my vision goes so triathlons allow me to do that."