We’ve all been worried for a while now about what changes were going to be made this year to the legislation that governs the NDIS.

Well yesterday the Minister for the NDIS Stuart Robert gave an interview on talkback radio in Sydney – and let slip some of what he has planned.

And in the process pretty much confirmed what we were all so worried about.

So what did he have to say?

On the face of it, the interview was about his already well-known opposition to the use of NDIS funds to fund sexual support services. The Minister was pretty unhappy when the Federal Court decided that one NDIS participant could use her funds for therapy. And he has been talking non-stop since then about how he wants to use legislation to prevent it happening again. So no surprises there.

But what the interview also revealed is that the Minister intends to try and change the legislation so that the Federal Government can define what is considered “reasonable and necessary” – rather than the National Disability Insurance Agency (NDIA).

Now while the NDIA doesn’t always get that right – AAT anyone? – it’s a whole different thing to try and use the legislation to say definitively what is in and what is out of the NDIS.

That was never the way the scheme intended to work. 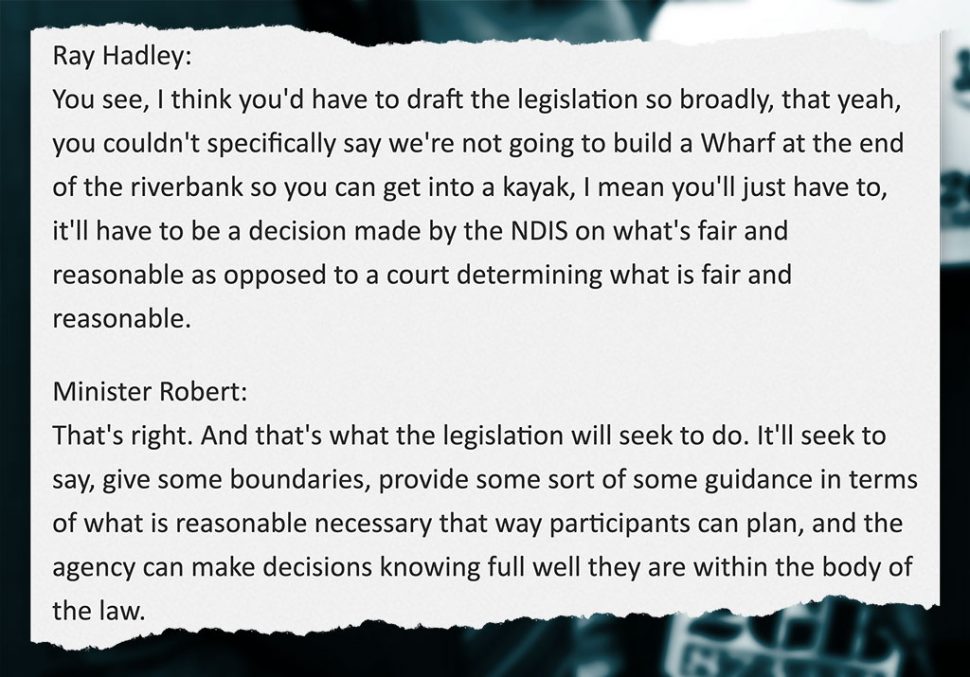 It looks like the Minister was trying to pull the old bait and switch. Or throw in a red herring. Or use smoke and mirrors. Use whatever analogy you like.

But while he was trying to distract us by talking about S-E-X he was hoping that we might not notice the bigger picture.

Sorry Minister – we’ve all been around too long to fall for that.

So what is the bigger picture?

Let’s talk about reasonable and necessary.

There is no definition in the NDIS Act. Section 34 of the Act instead sets out a series of principles, or things that the CEO must consider, before deciding something is reasonable and necessary.

The Act also doesn’t set out a laundry list of things that can and can’t be funded by the NDIS. And there’s a good reason for that.

There’s also a practical reason. Imagine trying to create that list for a scheme that has almost 500,000 people in it. People with different types of disabilities, different life circumstances, different needs and different goals. And then set that list in concrete by putting in legislation that is notoriously difficult to change.

So instead the parameters are set broadly in the legislation – and then it is up to the NDIA to come up with the operational guidelines to help planners make decisions around what is reasonable and necessary for each participant. And it is also their job to make sure those rules and guidelines are followed consistently.

Now everyone here knows the NDIA haven’t always been awesome with that. But that’s a practical implementation issue – rather than a legislative one.

The NDIA is an independent statutory body – it’s their job to work stuff like this out.

Mr David Tune in his recent review of the NDIS talked about the need to provide greater clarity around what is considered reasonable and necessary.

He recommended, for example, that the NDIA provide more information to participants about what reasonable and necessary is. He said there should be simple, easy to understand information, including case studies, to help people to understand what is likely to be considered reasonable. To help everyone – NDIA and people with disability and their families – get on the same page.

And while he made a number of recommendations about changing some parts of the NDIS Act, it is notable this current proposal was not one of them.

The rest of the puzzle

This proposed change to the legislation is just one part of a much broader set of changes the government wants to make to the NDIS.

These reforms are the biggest changes to the scheme since it started. And they are being pushed through despite the considerable concerns of people with disability and their families.

The message we consistently hear is – people fought hard for a scheme that saw them as individuals. Now that is under threat – and they don’t want to go back.

But back to the interview. Just to make sure the outrage got turned up all the way to 11, Minister Robert went on to suggest that so many people with disability were trying to use their NDIS funds to buy sexual services it may cost the scheme as much as $500 million per year in the future.

It’s not the first time he has made this claim – but once again he provided no evidence to back it up. And the language he chose was designed to provoke the kind of outrage only talkback radio can deliver.

So it’s clear the Minister wants us to have one kind of conversation. He wants people with disability and their families fighting amongst themselves. And he wants the public to be outraged at a claim which there is no evidence for.

But we are not biting. We want to have a different conversation – and one we reckon the Australian public is up for.

We want to ask different questions to the ones the Minister wants to ask. Like – what kind of an NDIS do we want? What kind of lives do people with disability in this country want – and what supports and services do they need to get there? How can the rights enshrined in the UN Convention become more than words on a page and actually be realised? How can we make sure the scheme really works for the people who it was intended to support?

We want a scheme that provides reasonable and necessary supports for people with disability. Support so they can live an ordinary life and enjoy the same kinds of opportunities as other Australians. A fair go. No more and no less.

That’s what we signed up for. And that should be the acid test for any changes – including the ones currently proposed by the government and the NDIA. Do they get us closer or further away from that vision?